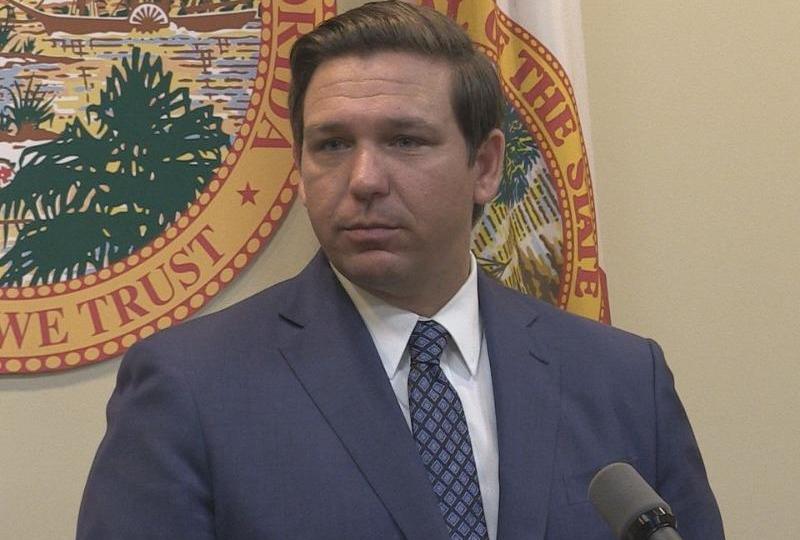 MIAMI, Fla. (NSF) – Surrounded by sports standouts, Gov. Ron DeSantis on Friday put his signature on a bill intended to allow student-athletes at Florida colleges and universities to cash in on their names and likenesses.

The athlete-compensation bill, which establishes rights for students and schools, allows college students to have professional representation through agents licensed by the state or attorneys in good standing with The Florida Bar.

“We’re not talking about you get a scholarship to Florida State or Miami and the universities are going to pay you to play. That’s not what we’re talking about,” DeSantis said during a press conference at the University of Miami’s indoor practice facility in Coral Gables.

During Friday’s bill-signing ceremony, DeSantis, who was the captain of the Yale University baseball team, explained how the law is designed to work.

The proposal is meant to allow “great athletes” to capitalize on their fame, the governor said.

Currently, student-athletes’ “name, image and likeness is being used to make millions and millions of dollars, and then they don’t even have the opportunity to get any of that,” DeSantis said.

Corey Simon, who played football for Florida State University before embarking on an eight- year career in the National Football League, said the state effort will compensate the students for their hard work.

“I think we get caught up in the moment where we start to look at athletes as we’re just robots and we’re out there just playing a game for everybody’s enjoyment,” Simon said during the bill-signing event. “Once we leave that court, once we leave that field, there’s still a responsibility that we have to our communities, to our homes, that we have to carry. And so, what this does is, this now allows those athletes to go and be creative.”

The Florida law was spurred by a 2019 California law that will allow college athletes in the West Coast state to hire agents and sign endorsement deals starting in 2023.

The Florida measure (SB 646) goes into effect on July 1, 2021. The delay is intended to pressure the NCAA to implement similar changes nationwide.

When asked about the Florida law on Friday, the NCAA had no comment.

NCAA spokeswoman Meghan Durham pointed to the organization’s “name, image and likeness” proposal that would allow student-athletes to receive compensation for third-party endorsements both related to and separate from athletics. The plan was sent to NCAA member schools in April, with input expected by October.

The NCAA proposal also supports compensation through such things as social media, personal appearances and businesses that athletes start.

But the plan, which is expected to be up for a final vote by January, leaves room for the NCAA and schools to regulate the types of deals athletes might be allowed to sign and the monetary value of individual contracts.

A concern is that that the NCAA proposal could exclude sneaker and apparel companies from entering third-party advertising agreements with college athletes.

Rep. Chip LaMarca, a Lighthouse Point Republican who sponsored the House version of the bill, on Friday remained critical of the NCAA’s approach.

“Wearing a school’s jersey should not mean choosing between your talent and earning money to support your education and your family,” LaMarca said. “Every one of the nearly half-million student athletes across the United States of America should be able to earn from their talent. And if the third-largest state in the United States can do it, then so can the collegiate-athlete organization.”

LaMarca pointed to a study from the Hope Center for College, Community and Justice at Temple University that found up to 19 percent of college athletes suffer from homelessness and 24 percent struggle with food insecurity.

House Minority Leader Kionne McGhee, a Miami Democrat, said Floridians have been calling for the current system to be changed.

“We understood early on that it was an unfair process,” McGhee said. “We understood also that the status quo that the NCAA held was wrong. We challenged and we’re not going to back down. So, to all the college student athletes out there, fairness is here. This is the day that you’ve been waiting for.”

Under the new Florida law, colleges and universities will be prohibited from putting restrictions on athletes earning outside compensation or receiving professional representation.

Schools won’t be able to revoke or reduce scholarships of athletes who earn off-field pay.

However, the measure prohibits college athletes from making personal deals that conflict with the terms of team contracts.

Critics of the bill during the 2020 legislative session expressed concerns that the change could affect existing contracts between Florida schools and national conferences, while lawmakers wanted prohibitions to keep students from doing deals with businesses involved with tobacco, alcohol or casinos.

DeSantis, who backed the measure when it was first proposed in October, said the state intends to put more protections in the process.

“Now, there is going to be a lot of different things that are going to need to be filled in, in terms of the gaps of how this is structured,” the governor said Friday. “It’s not necessarily going to be the wild West. There’s definitely going to be rules and regulations. And that will all be done by the Board of Governors and the other entities involved here.”