A new Florida law will allow college athletes in the state to make money from endorsements starting next summer.

Florida Gov. Ron DeSantis signed the bill Friday afternoon, adding an expected increase in urgency to the nationwide movement toward creating more opportunities for athletes to benefit from the billions of dollars generated each year by the college sports industry 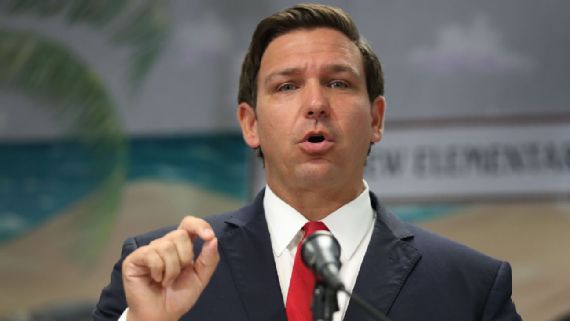 Florida Gov. Ron DeSantis signed a bill on athlete name, image and likeness into law on Friday, meaning athletes in the state can make money from endorsements starting next year. Joe Raedle/Getty Images

LaMarca (R-Lighthouse Point) sponsored the name, image and likeness bill that was passed by the state legislature last month and is awaiting Gov. Ron DeSantis’ signature. Florida’s action was part of the national wave that finally forced the NCAA to act..

In response to legislative action in other states, the NCAA has taken recent steps toward revising rules that currently prohibit student-athletes across the country from accepting money from third-party sources. Florida’s law puts additional pressure on NCAA leaders by significantly shrinking the timeline for them to enact the type of uniform national changes they say they prefer.

“This whole issue of student-athletes and being able to receive compensations for their likeness or image is something that’s been bubbling to the surface in the last couple years,” DeSantis said during a news conference at the University of Miami’s indoor football practice facility. “I viewed it as something that was a matter of fairness.”

Florida’s law is similar to those passed in California and Colorado in the past 10 months. California’s and Colorado’s laws are not scheduled to go into effect until Jan. 1, 2023. Florida’s legislation is scheduled to take effect on July 1, 2021 — 18 months sooner. Roughly two dozen other states are in various stages of considering similar proposals.

NCAA president Mark Emmert and other college sports stakeholders are strongly opposed to having individual states create new laws that dictate the rules for how college athletes can profit from the use of their names, images and likenesses (NIL). Emmert is concerned that a “patchwork” of state laws would cause student-athletes to pick schools based on where they can make the most money and give some athletic programs an unequal recruiting advantage.

The NCAA’s board of governors said in April that it supported a proposal to allow athletes to accept endorsement money with some restrictions or “guardrails” designed to maintain a clear distinction between college sports and professional leagues.

The proposal, however, does not provide specifics on how the NCAA would solve many of the most vexing problems with establishing those guardrails and deciding who should enforce them. College sports leaders are planning to iron out those details by the end of October and vote on the proposed changes at their annual meeting in January. There is no guarantee that the proposal will become an NCAA rule.

Florida’s law includes some restrictions, such as saying that payments to athletes must be “commensurate with market value” in order to “preserve the integrity, quality, character, and amateur nature of intercollegiate athletics and to maintain a clear separation between amateur intercollegiate athletics and professional sports.” The law also states explicitly that colleges and universities are not allowed to pay athletes directly.

Part of the NCAA’s April proposal included a plea to Congress to create a federal law that would both supersede the state-by-state legislation and codify the guardrails it says are important to preserving the “collegiate model” of sports. Ohio Rep. Anthony Gonzalez, a former college and NFL football player, said he is working on a federal bill that would open the market for college athletes to make money while also putting some restrictions in place to make sure endorsements don’t become a thinly veiled way to pay players for their participation in sports. Gonzalez expects to formally introduce the bill in the next month.

Now that Florida’s law is official, though, Congress has less than 13 months to pass federal legislation if it is going to preempt state law. The need for a relatively short turnaround comes at a time when Congress is moving much slower than normal and focusing elsewhere because of the global coronavirus pandemic. The months ahead will also present challenges as attention shifts to what many assume will be a contentious presidential election in the fall.

“In terms of interest and political will, I think it’s there,” Gonzalez said last week during an online panel discussion of the issue. “What is more of a complicating factor right now is just the calendar. … I think the much bigger potential hurdle congressionally is the reality of the calendar.”

Fellow panelist Val Ackerman, who is commissioner of the Big East Conference and co-chaired the working group that came up with the NCAA’s proposed rule changes, said help from Congress is the preferred outcome. Even if the NCAA is able to pass its proposed changes in January, they might include restrictions that conflict with Florida’s newly passed law. Ackerman said the NCAA also might seek help from the Uniform Law Commission, a nonprofit organization that crafts legislation in an effort to create more practical, consistent laws from state to state. If neither of those groups intervenes in the next 13 months, Ackerman said, she fears the outcome will be a problem for college sports.

“I’m not sure I’m the one to articulate what would happen next,” Ackerman said during last week’s webinar. “I do think it would create a very chaotic environment for our schools.”

The NCAA previously threatened to challenge the legality of state laws like the one passed in California last September, saying that it would violate a clause of the U.S. Constitution that prevents states from creating laws that burden interstate commerce. Advocates for change in college sports and some legal scholars disagree with that assessment.

Ramogi Huma, president of the National Collegiate Players Association, said there are several existing examples that show the NCAA is able to conduct its interstate business while dealing with state laws that create disparate situations for college sports teams. As one example, Huma recently pointed to the NCAA’s decision to support some of its member schools resuming sports activities sooner than others based on how individual states were lifting coronavirus-related restrictions.

“The NCAA claims that the ability to govern college sports is impossible if differences in state NIL legislation is allowed to take place,” Huma said. “However, it voiced no reservations about state laws dictating different reopening opportunities for college sports or against allowing its members to operate within the confines of those laws.”

Florida lawmakers such as state Rep. Chip LaMarca, who was instrumental in crafting the state’s new law, are not concerned with any legal challenges the NCAA might mount in the future. LaMarca and DeSantis both said they see Florida’s new law as an important victory for college athletics.

“For far too long, the collegiate athletic system professionalized everyone associated with athletics except for the young women and men who put in all the hard work,” LaMarca said Friday in a statement. “Today, we changed that. I cannot thank the countless students, parents, professional athletes, coaches, and directors enough for helping to get this bill over the goal line.”