Florida Gov. Ron DeSantis on Friday signed a bill that is aimed at helping college athletes in the state make money from their name, image and likeness, beginning on July 1, 2021.

DeSantis’ action makes Florida the third state with this type of law, joining California and Colorado. However, Florida’s law is set to go into effect 18 months earlier than the other two.

Because DeSantis (R) endorsed the idea of such legislation last October, his signature had been expected since the bill completed its path through the state legislature in mid-March, just as the coronavirus pandemic was taking hold in the United States.

But now that it’s official there will be even more urgency among college sports officials to lobby for the passage of a federal law that would supersede any state actions. The NCAA Board of Governors, its top policy-making group, has approved in principle a series of significant reforms related to athlete name, image and likeness (NIL), but many important details remain to be worked out before the association’s pledged completion date of January 2021.

“I viewed it as something that was a matter of fairness, and just understand what we’re not talking about,” DeSantis said at a press conference Friday. “We’re not talking about, you get a scholarship to Florida State or Miami and the universities are gonna pay you, that’s not what we’re talking about. You’re an amateur. … But, in a situation where you have some great athletes especially in sports like football and basketball whose likeness is being used to make millions and millions and dollars and they don’t even have an opportunity to get any of that, there’s something fundamentally unfair.”

Meanwhile, NIL measures were introduced in dozens of state legislatures over the past eight months.

Florida Gov. Ron DeSantis on Friday announced he will sign a bill that is aimed at helping college athletes in the state make money from their name, image and likeness, beginning on July 1, 2021.” Kirby Lee, USA TODAY Sports

Rep. Anthony Gonzalez (R-Ohio) said last week during a video meeting of the Knight Commission on Intercollegiate Athletics that he plans to introduce a bill by late June or early July that he says will be “bipartisan and bicameral.” There is already a bill in Congress from Rep. Mark Walker (R-N.C.), but it has stalled.

“Gov. Ron DeSantis was an early supporter of this law. Florida will now afford our state’s 11,000 collegiate athletes the ability to earn a living, the same as their fellow students,” Rep. Chip LaMarca (R), one of the primary sponsors of the bill, said. “For far too long, the collegiate athletic system professionalized everyone associated with athletics except for the young women and men who put in all the hard work. Today, we changed that.”

In May, Senate Commerce Committee Chairman Roger Wicker (R-Miss.) sent a letter to the NCAA, each of the Power Five conferences and dozens of other college sports organizations and schools asking for responses to 20 questions related to the issue. It seems likely that the committee will hold a hearing on the matter, which also has drawn the attention of Sens. Chris Murphy (D-Conn.), Mitt Romney (R-Utah) and other members of that chamber.

As with the California law and the NCAA’s proposal, Florida’s law will allow athletes to have agents or lawyers help them secure NIL deals.

But Florida’s bill has a number of provisions that are not in the California law. They represent an attempt to address some of college athletics administrators’ concerns about athletes being able to more easily monetize their name, image and likeness than they can under current NCAA rules. 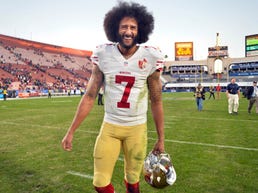 Pitcher on being Black in baseball: ‘I feel like I’m on an island’

Check out Tom Brady as a Buccaneer

►While athletes will be able to get NIL compensation on their own, “such compensation must be commensurate with the market value of the authorized use of the athlete’s name, image, or likeness,” although the bill does not define market value.

Gonzalez and others have raised the prospect of having an independent, third-party group oversee these types of determinations.

►Compensation related to NIL “may not be provided in exchange for athletic performance or attendance at a particular institution” and can only be provided by a third-party not affiliated with the school. How this would be enforced is not addressed.

Gonzalez said that in the bill he envisions, “we’ll be sensitive to that and have federal penalties for those who break those rules.”

►A school, a booster group or any other school fundraising entity — or an officer, director or employee of a school or such a group — “may not compensate or cause compensation to be directed to a current or prospective” athlete for their NIL. This is an effort to sideline leaders of booster groups and keep athletics departments from having staffers help athletes line up deals.

The NCAA’s concepts also have schools being prohibited from being involved in helping arrange these deals.

► An athlete cannot have a deal that includes any term that “conflicts with a term of the intercollegiate athlete’s team contract.”  This provision is aimed at addressing schools’ concerns about athletes having arrangements that could hurt school deals. This issue is particularly important in the area of shoes and apparel.

►An athlete who makes an NIL arrangement must disclose the contract to their school “in a manner designated by the institution.”

Florida lawmakers believe that their law would less susceptible to legal challenge from the NCAA than California’s law because it only directs schools in the state to allow athletes to have greater freedom regarding their NIL — it does not address the NCAA.

Gov. DeSantis signs bill allowing student athletes to get paid for their fa...
Scroll to top