Gov. DeSantis signs bill allowing student athletes to get paid for their fame 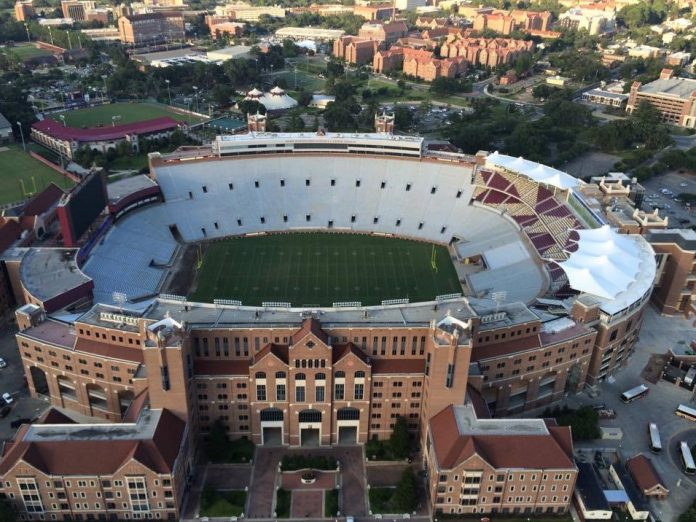 Gov. Ron Desantis traveled Friday to a University of Miami training indoor training facility to sign legislation allowing student athletes to benefit financially from the commercial use of their names, images, and likenesses, beginning in July 2021.

The legislation (SB646) would require colleges to approve such contracts, and the State University System’s board of governors and the State Board of Education would need to draft rules putting the measure into effect.

The governor called the measure “a matter of fairness” and said it won’t affect the traditional athletic scholarships or amateur status. Participation wouldn’t be limited to big-money sports.

“If you have a situation where you have some of the great student athletes, particularly in sports like football and basketball whose name, image, and likeness is being used to make millions and millions of dollars, and they don’t even have the opportunity to get any of that — there’s something fundamentally unfair for that,” DeSantis said.

The NCAA has agreed to let athletes profit from the use of their names, images, and likenesses “in a matter consistent with the collegiate model” but they could not collect pay directly for their athletic performances.

DeSantis, who played baseball during his undergraduate days at Yale, had endorsed the idea soon after it was proposed by House members Kionne McGhee, a Democrat from Miami, and Chip Lamarca, a Broward County Republican. The Senate sponsor was Brevard County Republican Debbie Mayfield.

Student athletes taking advantage of the new law will need to take workshops in financial literacy and life skills.

“The workshop shall, at a minimum, include information concerning financial aid, debt management, and a recommended budget for full and partial grant-in-aid intercollegiate athletes based on the current academic year’s cost of attendance,” the law says.

Simon noted that student athletes from impoverished background and their families make financial sacrifices so they can play and work toward their educations.

“It’s that old adage: Strike while the iron’s hot. Well, for some of them it will never be as hot as it is when they step foot on a college campus,” he said.

These South Florida candidates made the 2020 ballot for state House, Senate...
Scroll to top