Though no athletes were practicing on the indoor practice fields at UM, Friday, June 12, 2020, Gov. Ron DeSantis was on the artificial turf signing a bill that will allow college athletes in the state to profit off their name, likeness and brand. BY EMILY MICHOT

Florida Gov. Ron DeSantis, a baseball player during his days at Yale University, signed a bill Friday during an appearance at the University of Miami that will allow college athletes in the state to profit off their name, likeness and brand.

The law goes into effect in July 2021, making Florida the first state to allow these benefits. A similar California law does not go into effect until 2023.

DeSantis said the current model, which prohibits college athletes from receiving any compensation related to their sport, is “fundamentally unfair” because other students such as band members are allowed to make money on the side from their talents.

“We are not talking about you get a scholarship to Florida State or Miami and the universities are going to pay you to play,” DeSantis said. “That’s not what we’re talking about. You’re an amateur, you’re going to get a great education, that basic model is the same. But, if you have a situation where you have some of the great athletes, particularly in football and basketball, whose name, image and likeness is being used to make millions and millions of dollars and they don’t even have the opportunity to get any of that, there’s something fundamentally unfair about that.”

He said the issue became even more clear to him after watching a marching band at a football game last season.

“I thought to myself, `Any one of those band members could do a YouTube channel, make a lot of money as a student and no one would say anything. And when the players came out, if a player tried to make money off his image, it was forbidden. So that means we are treating athletes less favorably than the average student. But this is not about paying for play, they are still amateurs.”

The bill will require student-athletes to take financial literacy courses and will allow them to hire agents.

Former UM football great Jonathan Vilma, who played in the NFL, was on hand for the announcement. He said: “This is a historic moment. We, as student-athletes, watched as other people were profiting and making money. We enjoyed playing and getting our education, and those of us who were fortunate enough to get to professional sports and we appreciated where we started and the scholarship.

“But at the same time, we still understood the economics of what we did and how much we produced financially for the university and college sports in general. We had always felt there was going to come a tipping point where student-athletes would come together and say, `Enough is enough.’”

Corey Simon, a former Florida State University football player and Philadelphia Eagle, added: “A lot of kids sacrifice to come to college as student-athletes because many of them were working, bringing money into the home, and the parents said, `You have to get an education.’”

With a July 2021 start date, the Legislature allows the NCAA time to adopt its rules and allows time to establish how the new system would be enforced. Critics of allowing pay for college athletes’ names and images say it could lead to more corruption in college athletics and recruiting if money is allowed to be exchanged without strict oversight.

The NCAA Board of Governors in October said it would consider updates to policies, with a January 2021 deadline.

DeSantis threw in a plea to the state’s high school athletes to stay in state for college: “I just want to say Florida is leading on this and if you’re a blue-chip high school recruit out there trying to figure out where to go I think any of our Florida schools is a great landing spot.”

“Florida is not a follower,” Rep. Chip LaMarca said. “We are a bold leader. This will change the conversation of the NCAA. Fairness is here. This is the day we’ve been waiting for.” 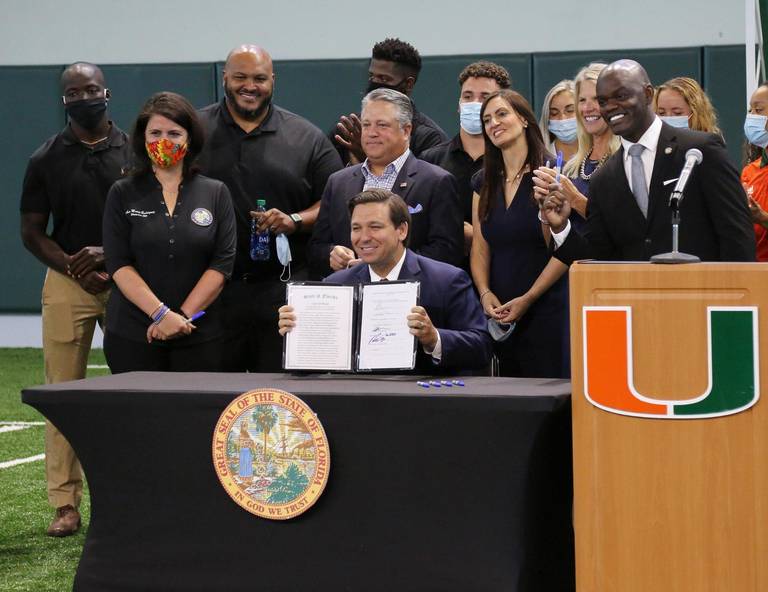 During an appearance at the University of Miami Friday, June 12, 2020, Governor Ron DeSantis signed a bill allowing college athletes to be paid for name, image and likeness. The announcement was followed by reporters questioning DeSantis about the rise in cases of covid-19 in Florida and the decision to allow Jacksonville to host the upcoming Republican National Convention with the rise of cover-19 cases. EMILY MICHOT EMICHOT@MIAMIHERALD.COM